The Matsas family first began its involvement in shipping in 1880, when the family company was established by Loucas K. Matsas, a pioneer who was born on Amorgos Island. Loucas settled in Piraeus at Botsari Street, where the Company’s main offices are still situated today.

At the outset, the company built their first tug in Samos Island. She was made of wood, steam powered and named “AGHIOS GEORGIOS”. At that time, Piraeus had no piers and therefore the sailing boats and the few steam-powered vessels were anchoring in the port and unloading their cargo onto barges. For many years “AGHIOS GEORGIOS” towed barges with various cargoes from Pachi to Piraeus. Also, she towed large sailing boats from the port to the roads before they set sail.

The founder of the Company Loucas K Matsas and his wife Marigo had six sons, who comprised the second generation of Matsas Company. The son of the first-born son George, was Loucas G. Matsas (1916-1993), who had three children, Maria, Alina and George Matsas, today's president.

A coastal cargo / passenger vessel sits on a rocky seabed. The Matsas Salvage Tug had to wait until the sea became dead calm in order to shift near the casualty and establish her towline connection (picture below).

Salvage services were rendered to Passenger Vessel “POPI”, which ran aground off Fleves Islet, Saronic Gulf in 1935. Both crew of the participating Salvage Tugs “MARIGO MATSAS” (built in 1900) and “AGHIOS NIKOLAOS” (built in 1907) and the Matsas Company were congratulated by the Government for the successful refloating and towage of the vessel to Piraeus (picture below).

The first act of sabotage in the port of Piraeus was on 30th of May 1941. Greek patriots caused a major fire to the Bulgarian transport vessel “MARIA LUISA”. The vessel was laden with ammunition destined for the German army that was engaged in the final phase of the great “Crete Island combat” with Alliance and Greek rearguards still on the Island.

The Germans had the command of port Tugs and compelled them to tow the burning vessel out of the port. This operation was extremely dangerous. Tugs “MARA”, “ZOODOHOS PIGI” and Matsas Tugs “AGHIOS DIMITRIOS” and “AGHIOS NIKOLAOS” were towing from the bow the vessel on fire, which was expected to explode any moment. A third Matsas Tug, the “HELLISPONTOS” with the 25 year old Loucas G. Matsas onboard, was steaming to the pilot station to pick up a pilot.

“MARIA LUISA” exploded while being towed to a location near Vassiliadis Shipyards. The explosion was tremendous and flying glowing pieces of iron spread the fire to 3 other vessels, the Romanian “ZIUL”, the Italian “ADIS ABEBA” and the German “ALICANTE” which also exploded shortly after. All with crew onboard.

It was a miracle that the Greek Tugs suffered only two casualties, one Captain and one stoker. The city of Piraeus, thanks to these port Tugs, was rescued from a major catastrophe because if the casualty was not removed from port, the fire would spread in shore causing huge damage and many victims.

In parallel with the Salvage and Tug-owning business, since 1955 Loucas G. Matsas also operated General Cargo vessels such as the “GEORGIOS M”, “FLORA”, “LOUKIA”, “GEORGIOS M II”, “CONCORD”, “GEORGIOS MATSAS”, “ALMAJOR” and others.

Passenger vessel ADRIAS II grounded on Falconera Islet in November 1952, 40 miles NW from cape Maleas while on voyage from Crete Island to Pireaus and suffered an opening of 12 meters in length. The Matsas Company who participated in the refloating work of Passenger Vessel “ADRIAS II”. 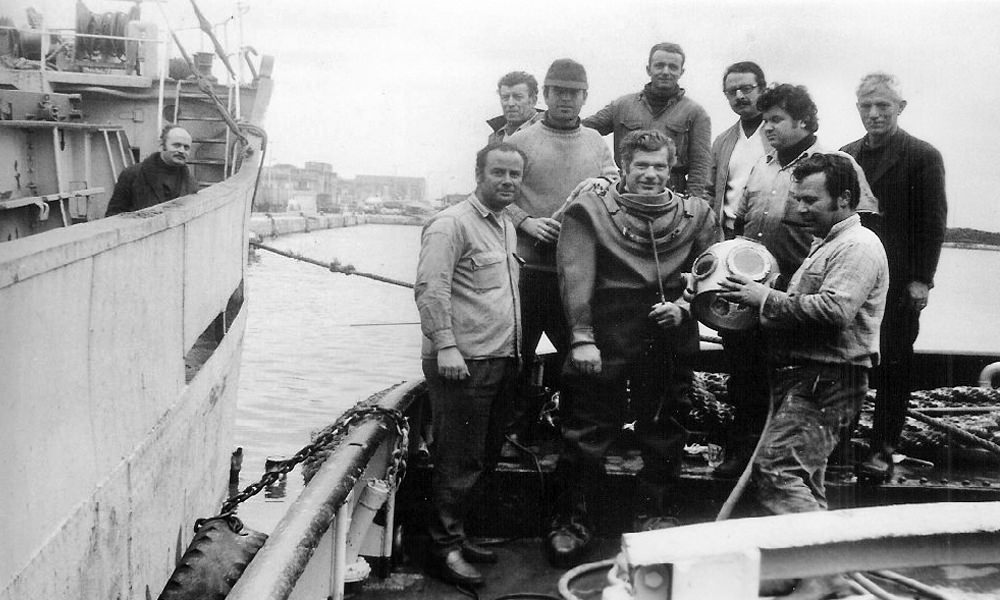 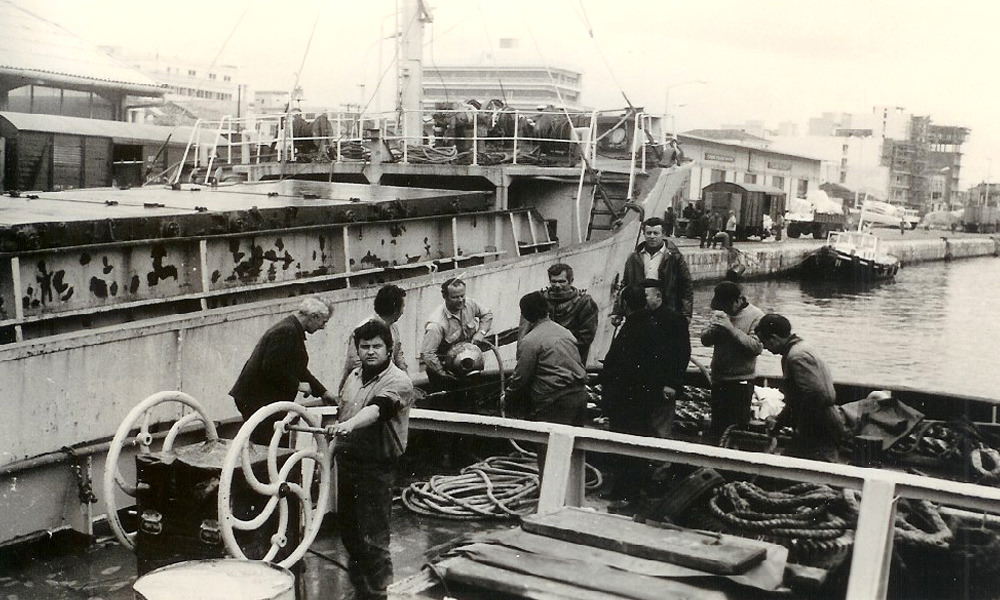 Divers of Matsas Company assist in the refloating of ANDRIAS II. The stink from the rotten meat in the vessel’s fridges, forced the crew to throw them into the sea. As a result, a shoal of sharks caused a lot of trouble to the divers who were occupied in sealing underwater vessels’ openings. Up to the early 1960s, the Salvage Tugs were manned with divers who wore the old fashioned diving suits with the iron helmet and were supplied with air from the vessel with the use of a hose.

Arkitsa and Edipsos sea route was first established by Loucas G. Matsas who built four Carferries in 1959, connecting mainland Greece with Evoia Island. This regular line continues until today to serve the transportation needs of the area.

Salvage Tug ‘ASTERI’ was the first new-building deep sea salvage tug to be built in Greek shipyards. It was commissioned in 1970 and during its 25 years of service, this legendary salvage tug participated in numerous successful salvage operations in Hellenic waters as well as in Mediterranean Sea, Red Sea and Black Sea.

In 1979, the first Greek owned fleet of Supply boats was formed, initially providing their services to oil platforms and drilling rigs in Kavala, Greece and later expanding worldwide reaching a fleet of 15 specialised Anchor-Handling Tug Supply Vessels, all built in The Netherlands.

At that time, the son of Loucas G. Matsas and today’s President, George L.Matsas, joins the Company, having graduated from ASDEN School of Master Mariners, with marine service and experience in oceangoing Tugs and Commercial Cargo Vessels.

In 1983 the Company’s provided services to drilling rigs and oil platforms in Tunisia, Egypt and Singapore area.

During the Gulf War of 1985-1988 and despite the potential dangers, three SMIT-MATSAS Greek flagged Salvage Tugs continuously render salvage services to Greek and foreign flagged tankers ablaze, saving lives as well as precious cargoes worth billions of dollars.

During the return voyage of daily cruise vessel “CITY OF POROS”, from Saronic Gulf Islands to Piraeus in July 1988, three armed terrorists started throwing grenades and shooting at 468 passengers and crew, setting the vessel ablaze. Nine people were killed and sixty were injured. Matsas Tugs “ALCYON” and “PEGASUS” arrived first at the burning vessel, commenced firefighting and collected 250 passengers on their decks. The remaining passengers boarded another ferryboat. After extinguishing the fire, the casualty was towed to the port of Piraeus (picture below).

In 1991, Matsas together with SMIT engage to lift for the first time in Greece by cutting (with anchor chain) the wreck of an 8000 tons cruise vessel, which remained sunk at the new mole of Drapetsona, blocking precious berthing space. For the purpose of the underwater cutting, one of the biggest cranes in the world, “SMIT TAK 4” was used.

Following the collision of a Russian tanker with a general cargo vessel, in 1992, S/T “MATSAS STAR”, the biggest Greek salvage tug, was the only vessel (despite the Beaufort force 10 weather) able to arrive and disperse the large oil spill created by the collision. Our immediate response prevented a huge ecological disaster, since the oil slick was heading towards the coasts of Andros, Syros and Mykonos Islands, which depend on tourism and clean beaches.

A tragic episode for the Greek shipping industry was when the vessel “DYSTOS” abruptly capsized and sank in a depth of 35 meters in 1996. Our Salvage Tug S/T “MATSAS STAR” and tug “PEGASUS” together with 20 experienced Greek Divers undertook the recovery of the dead mariners from the vessel.

Off Singapore in an exposed in adverse weather conditions area during 1997, a fully-laden grounded Container Vessel of 19,800 tons was refloated following a huge transhipment operation, which lasted for 120 days and involved 80 divers working on 24 hours shifts.

In 1997 a fire on M/V “ANAFI”, was successfully extinguished before reaching the cargo holds. Laden with 46,300 tones of Chinese coal, she was abandoned off Piraeus Roads. Matsas immediate response was again imperative, as otherwise the Piraeus port area would have faced an imminent pollution threat. (pictures below) 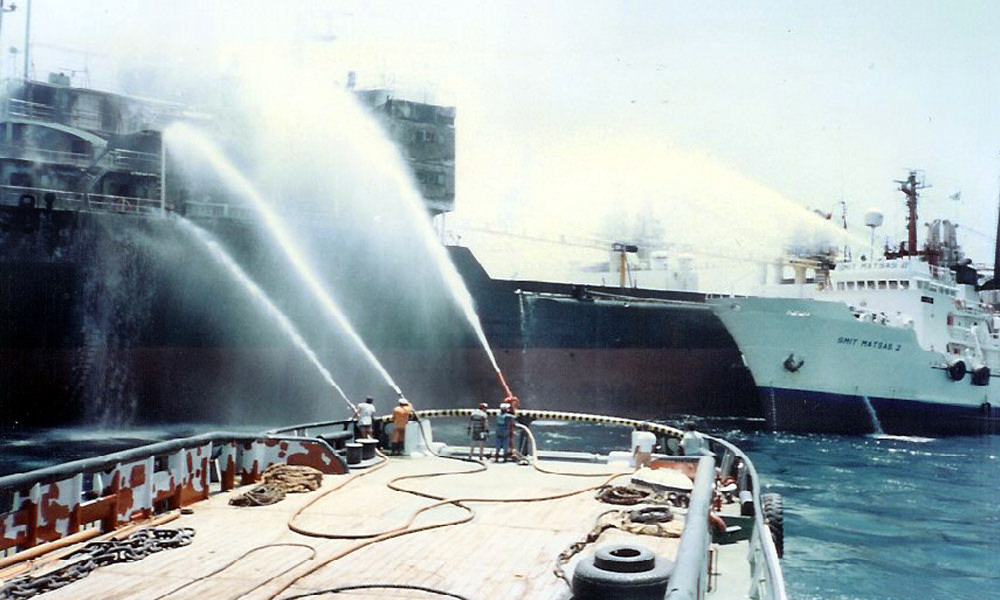 Off Evoia island, in 1998 an abandoned general cargo vessel stranded at a tourist area was refloated. This casualty was pounding along the rocky shore, leaking fuel oil. Her tanks were patched and a cautious refloating operation was planned and executed. The surrounding sea and shore, was then cleaned up by special anti-pollution material.

A 30,241 ton container vessel laden with dangerous cargo, was abandoned by her crew and ablaze off the Egyptian Coast in 1999. “MATSAS STAR’’ searched and located the container vessel, which was found having ran aground nearby a tourist resort on the Egyptian coast. After successfully extinguishing the fire of her toxic cargo, the casualty was refloated and delivered to Malta for repairs.

A bulk carrier laden with a full cargo of perlite, run aground at Prassonisi islet off Kythira island. MATSAS was contracted under SCOPIC for oil removal, antipollution services, under supervision of SCR appointed by the P&I Club. Services lasted approx. 120 days due to bad weather and condition of the wreck after grounding on the rocky shore.

Between Greece and Sicily in very bad weather conditions, a bulk carrier laden with 5,905 M/T of wheat was abandoned by all her Crew. Her engine room was completely flooded and she had developed a heavy list. "MATSAS STAR" started searching for the vessel from reports of her crew, which were rescued by a passing-by cargo vessel. After 12 hours of searching "MATSAS STAR" located, connected, and placed pumps in the casualty's engine room and safely towed her to Peloponese for delivery to her Owners.

In Great Belt, Denmark, a bulk carrier laden with 67,000 M/T of barley grounded. Our salvage team was mobilised and arrived on site and upon lightering part of the cargo succesfully refloated and salved the vessel and cargo.

Grounded at Chios Island, a Ro-Ro vessel of 11,152 GT was immediately attended by our Salvage tug “MATSAS STAR”, together with our tugs “AMAZON” and “PEGASUS’’, removed her bunkers and all pollutants before also salving the trucks and cargo being transported.

At Serifos Island, a laden container vessel grounded at full speed on rocky shore, causing serious pollution threat during the peak of the tourist season in this Aegean island. Our Salvage Tug "MATSAS STAR" and our Tug "AMAZON" were immediately mobilized whilst our Salvage team prepared the necessary environmental protection equipment. We successfully removed all bunkers from the laden container vessel and transshipped part of her cargo in order to refloat her by combined efforts of our tugs. Upon refloating, all bunkers and cargo were reloaded on board and vessel and cargo delivered safe to their Owners.

The ‘Loucas G. Matsas Group of Companies’ are presently headed by Captain George L. Matsas together with his daughters, Loukia G Matsa and Ioanna G Matsa, aided by an accumulated experience of 138 years. They run the business together with trustworthy Managers and specialized and loyal personnel and Crews.

Close cooperation with International Maritime firms and Shipowners enables the Company to respond immediately to Marine Emergencies, worldwide, to protect our sensitive environment.

With a history spanning 3 centuries, the company continues its successful operations in Salvage, Towage, Shipowning, Shipbroking, and Maritime Services, aiming to provide top quality benefit to Greek and International Shipping.